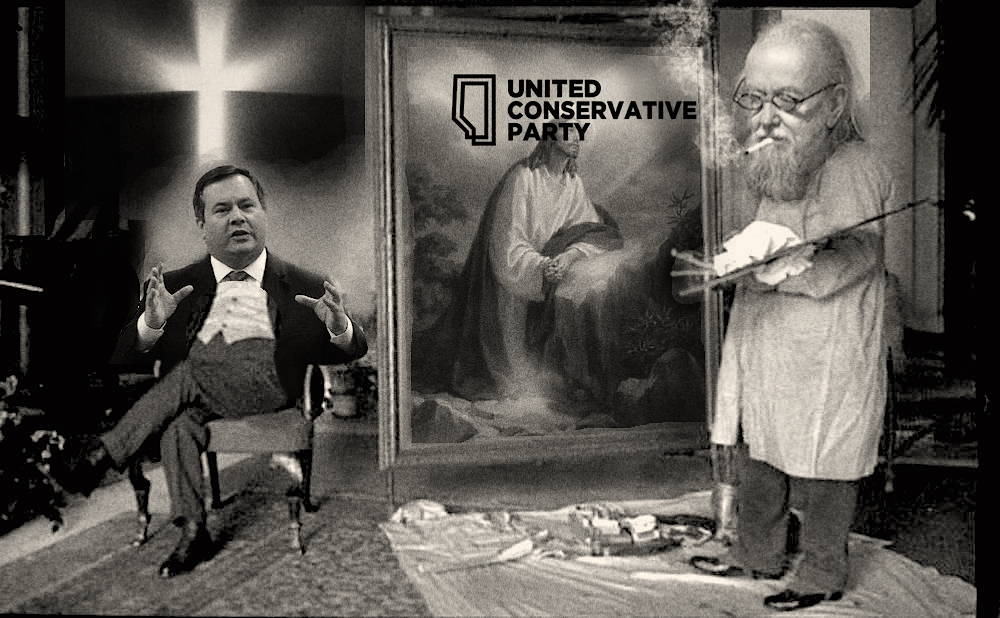 Court Painter Studio Enterprises is going to start delivering portraits not just to doorsteps, but inside homes as well.

The new fulfillment delivery service, called Pick Your Lock, incorporates a smart lock fitted to a patron’s door, as well as a new Court Painter security camera to record the movements of the delivery person Press Attache A  Hardon MacKay, the studio said with enthusiasm on Wednesday. The Court Painter Studio will also sell its I Spy with My Little Eye Cloud Cam as a standalone piece of hardware, moving the portrait studio business into the home security snoop market and setting it up to compete with traditional players including Netgear Inc. as well as newer entrants like Alphabet Inc.’s Nest Labs.

Doors will only be opened for delivery if the driver A Hardon MacKay is verified by the studio system, and using a state of the art device to unlock doors he is allowed to pick the lock, being equipped with a hair pin and a battering ram if required. The service is a perk available exclusively to Court Painter’s premium portrait patrons, and starts at $250. The In-Home Kit includes a Court Painter I Spy With My Little Eye Cloud Cam and one of several smart locks made by local ex art felons.

“Court Painter’s Pick Your Lock gives art patrons peace of mind knowing their portrait orders have been safely delivered to their homes and are waiting for them when they walk through their doors,” A Hardon MacKay, Press Attache and vice president of delivery technology, said demurely.

The I Spy with My Little Eye Cloud Cam, will additionally be sold as a standalone device for $120. Much like Google’s Nest Cam, it allows for remote snooping of homes, two-way communication and web-based video recording that Court Painter will use as source material for future intimate portraits and privacy intrusion commissions. 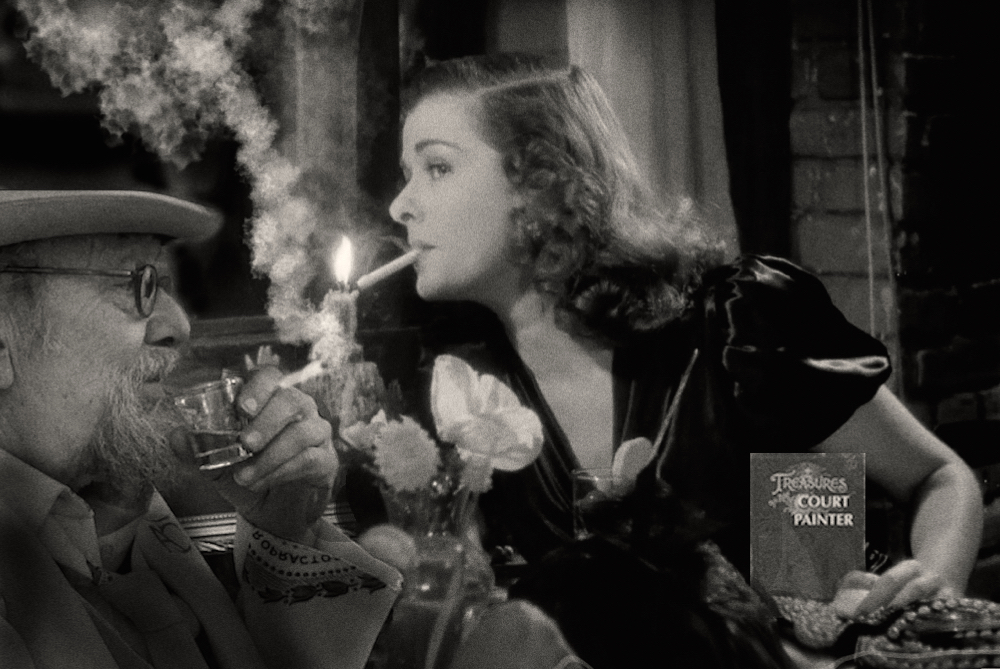 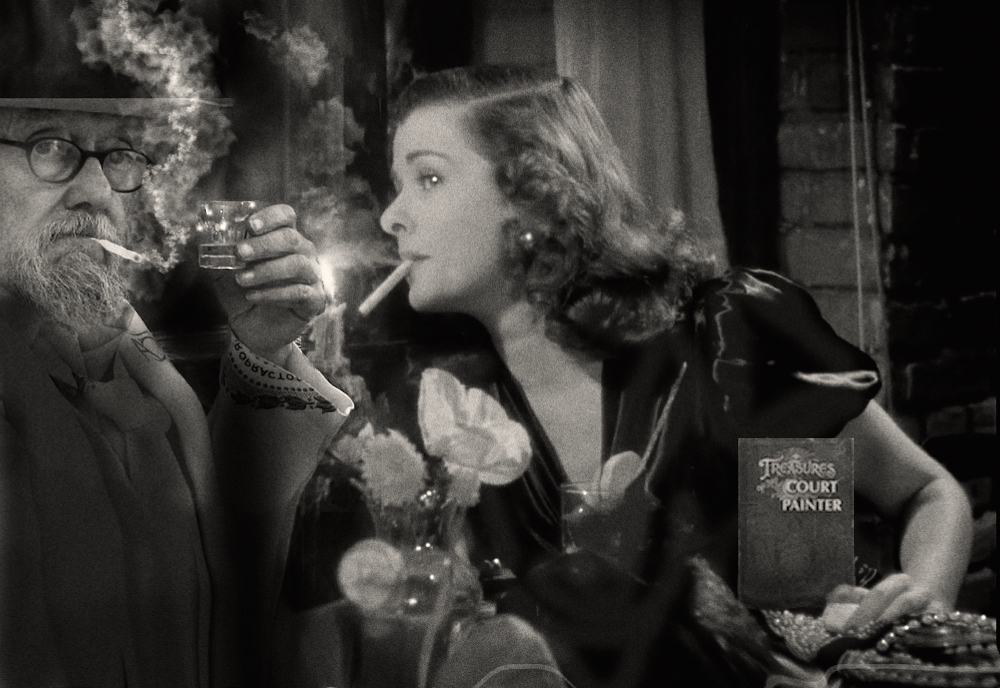 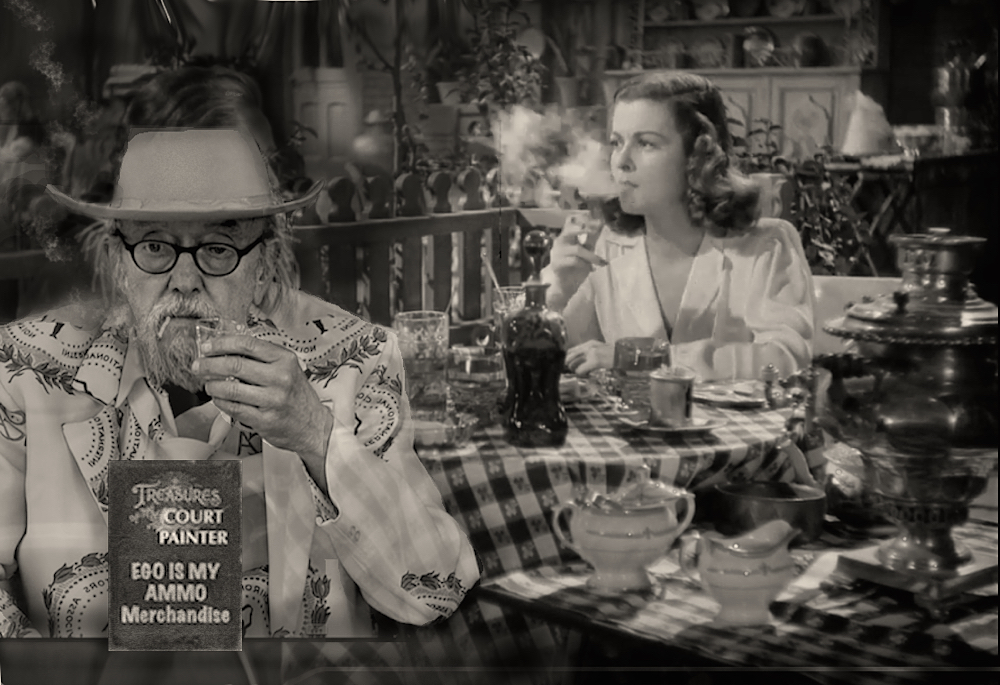 Court Painter’s Pick Your Lock also opens the door to future integration with in-home service providers, such as art work dusters and painting & pet sitters, in the coming months. Court Painter Studio intends to give art collectors the ability to let third parties enter, conduct their business in the bathroom if need be, and depart with the house fastened up securely all the while being monitored by the I Spy with My Little Eye Cloud Cam.

Stephen Harper has come out against Trudeau’s handling of NAFTA negotiations with the United States, with the former prime minister declaring the negotiations in real peril in a memo titled, “Napping on NAFTA.”

The memo was obtained by The Canadian Press and it criticizes the Trudeau government in several areas: For too quickly rejecting U.S. proposals, for insisting on negotiating alongside Mexico, and for promoting progressive priorities like labour, gender, Aboriginal and environmental issues.

The former prime minister says he was worried by what he heard during a recent trip to Washington, where he discussed NAFTA at an event but did not publicly share his misgivings about the Trudeau government. 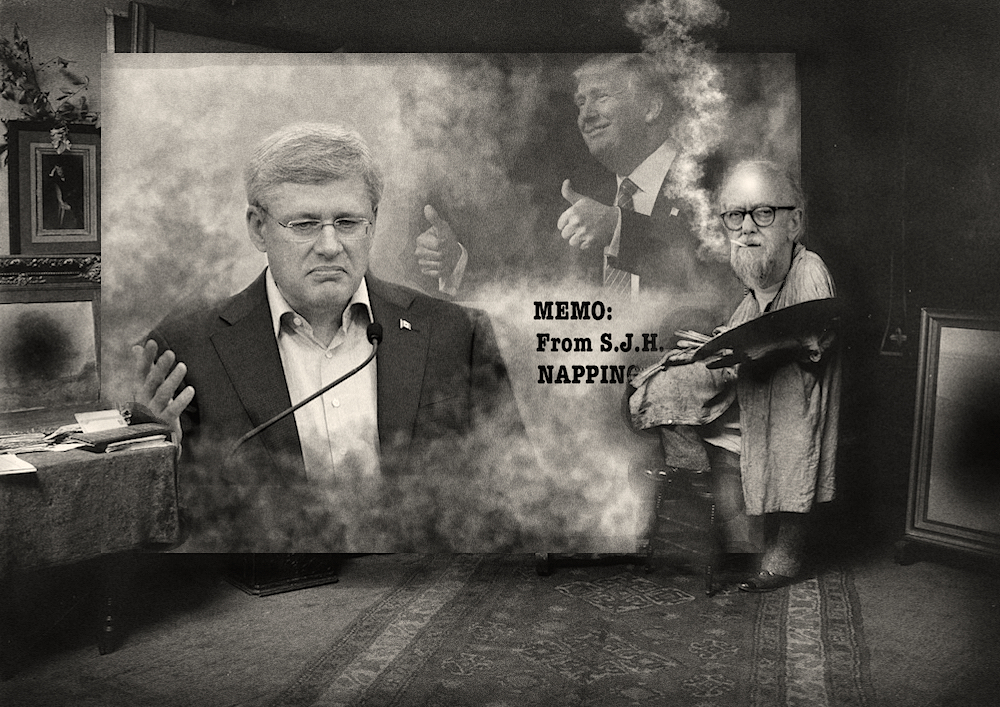 The race to become the first leader of the new United Conservative Party of Alberta has entered the home stretch, with the victor to be determined by force of personality and strength of campaign organization.

Membership in the UCP will consist of all who are ordinarily residents of Alberta who are at least 14 years of age. 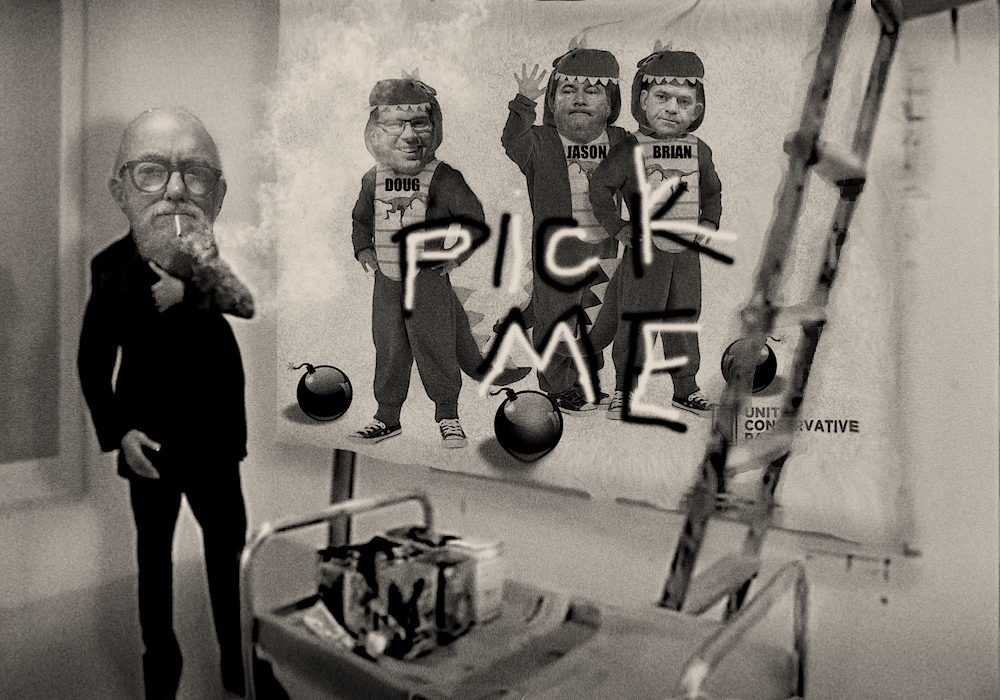 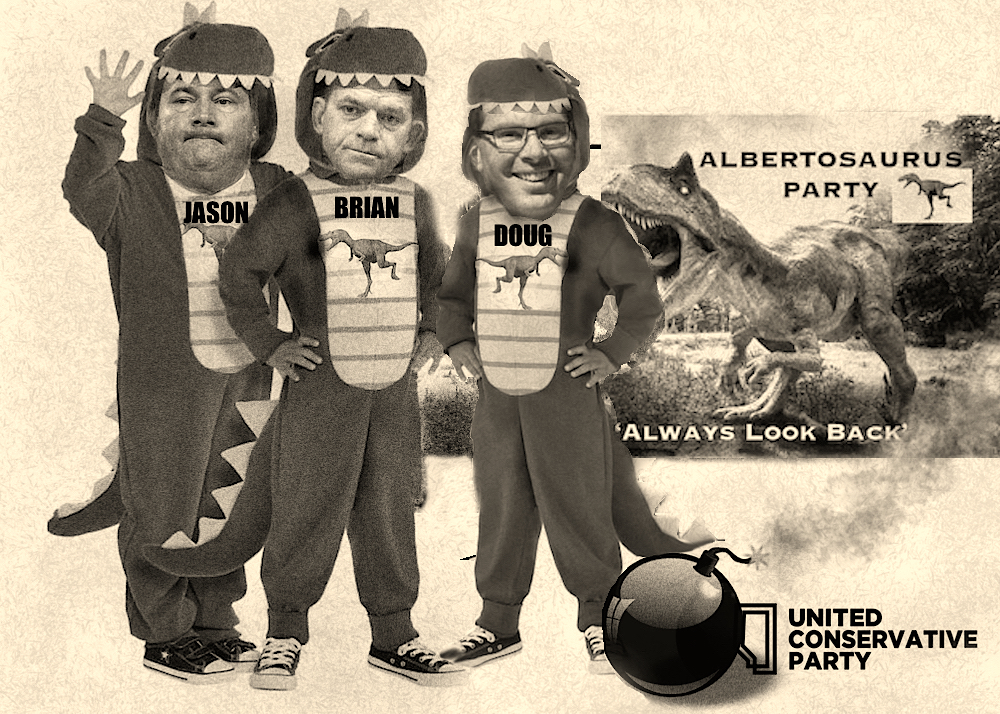 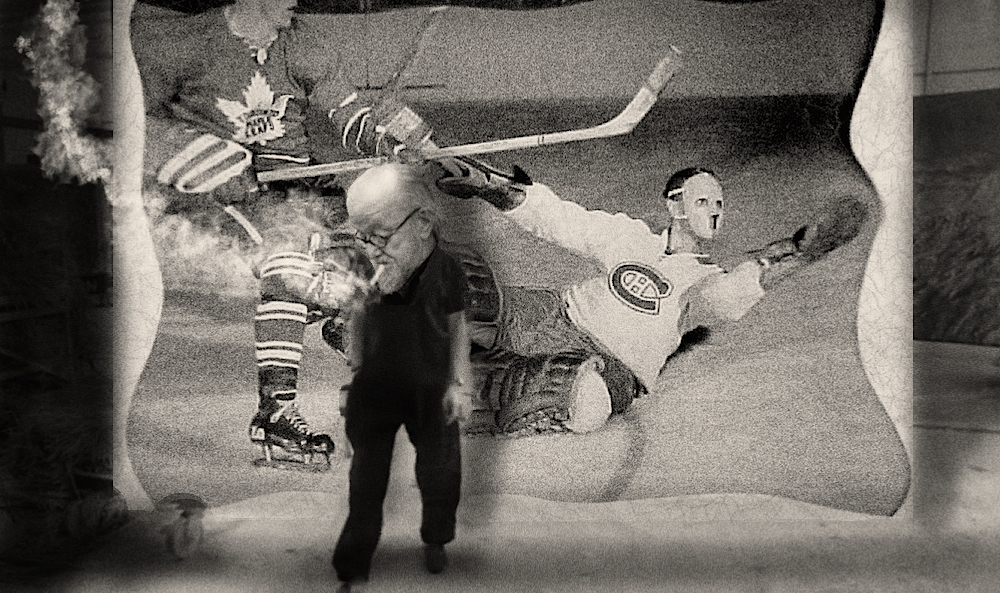 Jacques Plante was a Canadian professional ice hockey goaltender. During a career lasting from 1947 to 1975, he was considered to be one of the most important innovators in hockey. He played for the Montreal Canadiens from 1953 to 1963; during his tenure, the team won the Stanley Cup six times, including five consecutive wins.

He was the first goaltender to create and use a practical mask in 1959.When Plante introduced the mask into the game , many questioned his dedication and bravery; Montreal went on to win their 5th Stanley Cup that year!
His face covering and refusal to remove it but once changed the game of hockey forever!

Speaking of face covering lets skip ahead to Quebec in 2017.

Bill n°62 : An Act to foster adherence to State religious neutrality and, in particular, to provide a framework for requests for accommodations on religious grounds in certain bodies 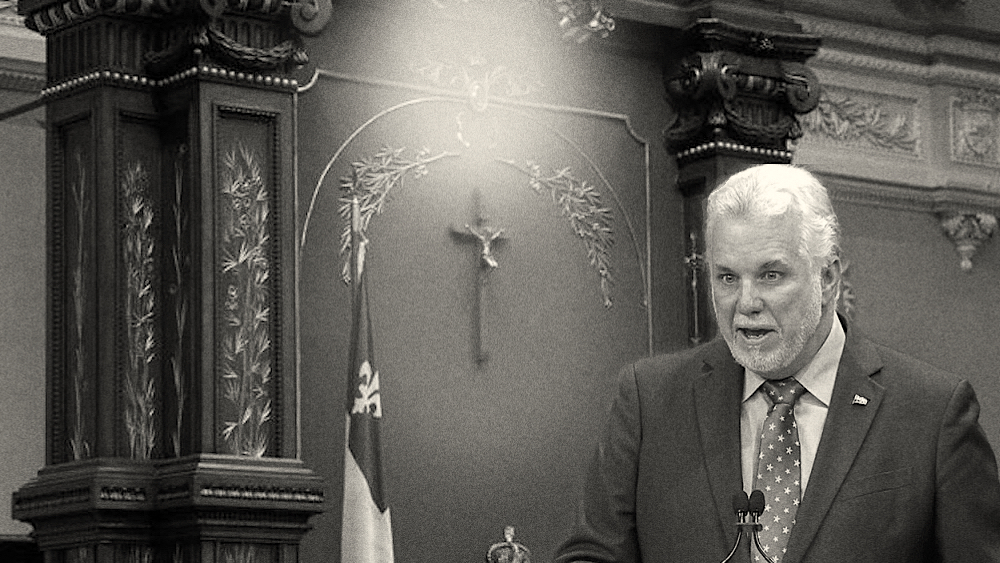 “I should see your face, and you should see mine.
We are just saying that for reasons linked to communication, identification and safety, public services should be given and received with an open face.”
Quebec premier Couillard says of new religious neutrality law while standing in front of the crucifix hanging in the Quebec National Assembly. Would that imply that “certain bodies” means the face coverings on certain Muslim women’s bodies? Most certainly….on that we can be certain should this law be enacted! 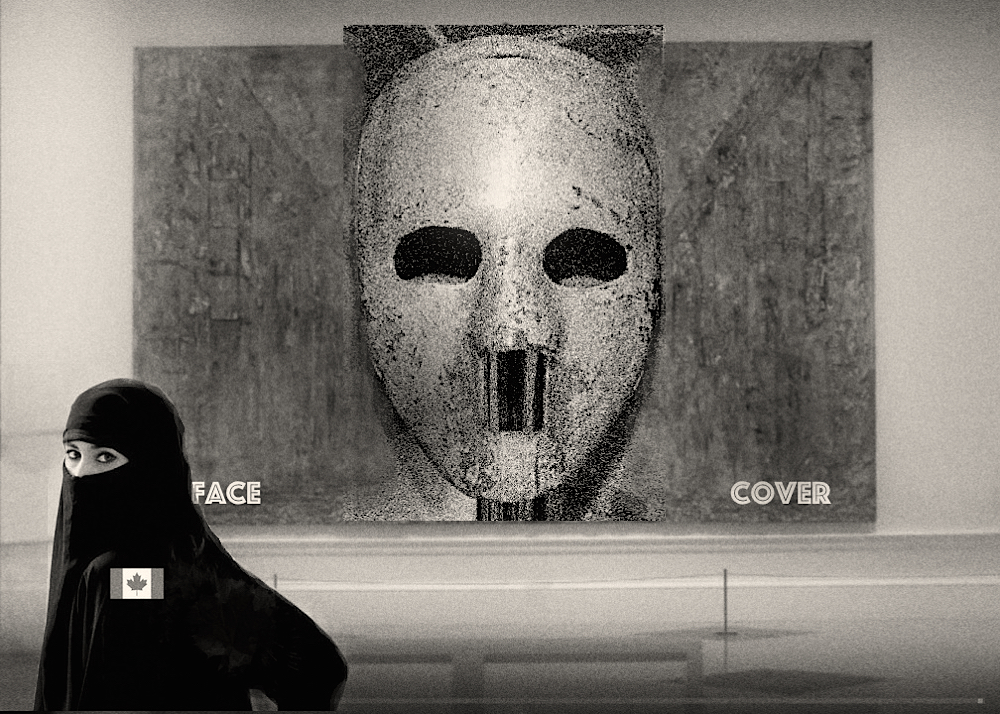 Paul Wells wrote Oct 23 in Macleans
Why Quebec’s Bill 62 is an indefensible mess      ‘Well, ain’t it the damnedest thing, then, that Bill 62 seeks to fight coercion with coercion. A singularly time-limited, bashful, unevenly applied, hypocritical coercion, but coercion all the same. Orwell said some things are so stupid only an intellectual could believe them. Similarly, some things are so reminiscent of the overweening Catholic Quebec state of the mid-20th century that only in the name of purging such authority could anyone dream them up.’

Brash, brawny and keen to impose his will on anyone who enters his studio sphere of existence: the alpha male Court Painter in action is unmistakable.

Now scientists claim to have pinpointed the biological root of his domineering behaviour. New research has located a brain circuit that, when activated , transformed a once timid portraitist into bold alpha action painter that almost always prevails in aggressive social encounters i.e.: at art openings pushing to the head of the wine & free snacks line . 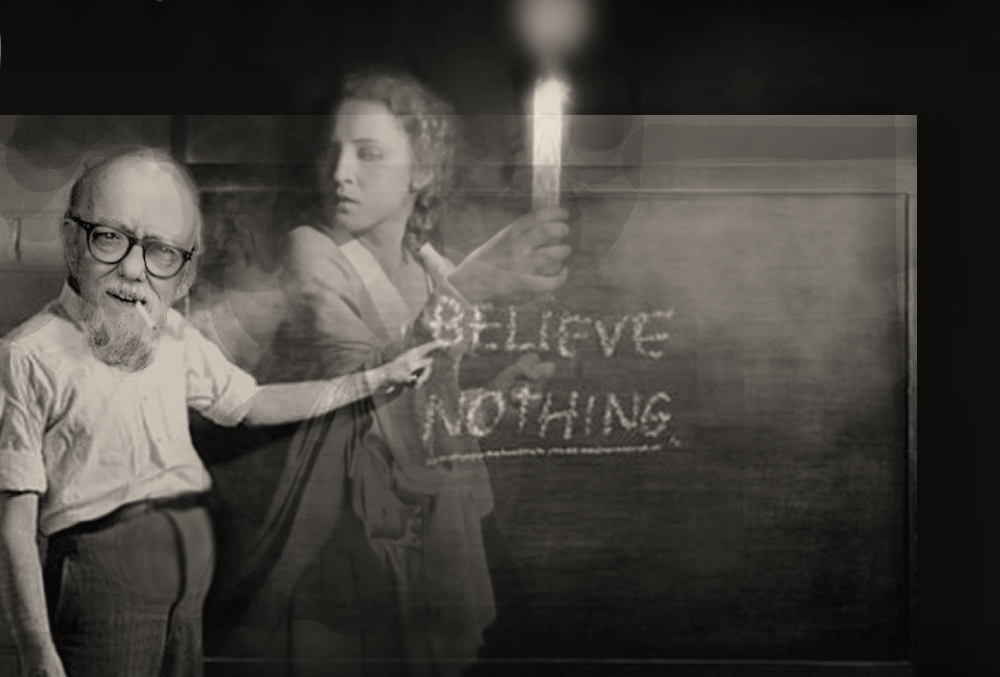 The brain region, called the dorsal medial prefrontal cortex (dmPFC), was already known to light up during social interactions involving decisions about whether to be assertive or submissive with others. But brain imaging alone could not determine whether the circuit was ultimately controlling how Court Painter behaves.

Court Painter generally organizes his studio with stable social hierarchies that minimize conflict between his unpaid studio interns. However, just for laffs he sometimes will pitch studio interns of different rank against each other in a range of tests to assess dominance.

In one, pairs of studio interns engaged in a head-to-head chess match. In the video that Press Attache A Hardon MacKay recorded, one subordinate intern is seen putting up only light resistance, but when the “alpha” circuit is stimulated by copying Court Painter’s aggressive behaviour, the intern adopts a rugby-style drive, propelling the opponent away from the chess board. With brain stimulation, low ranking interns won 90% of the time against collegues they would normally have lost to.

The experience of winning appears to always leave an imprint on Court Painter, making him more assertive, even when his brains’ on cruise control. He is found to be more combative after completing a painting by noon and moves on to a fencing match with a girly girl. 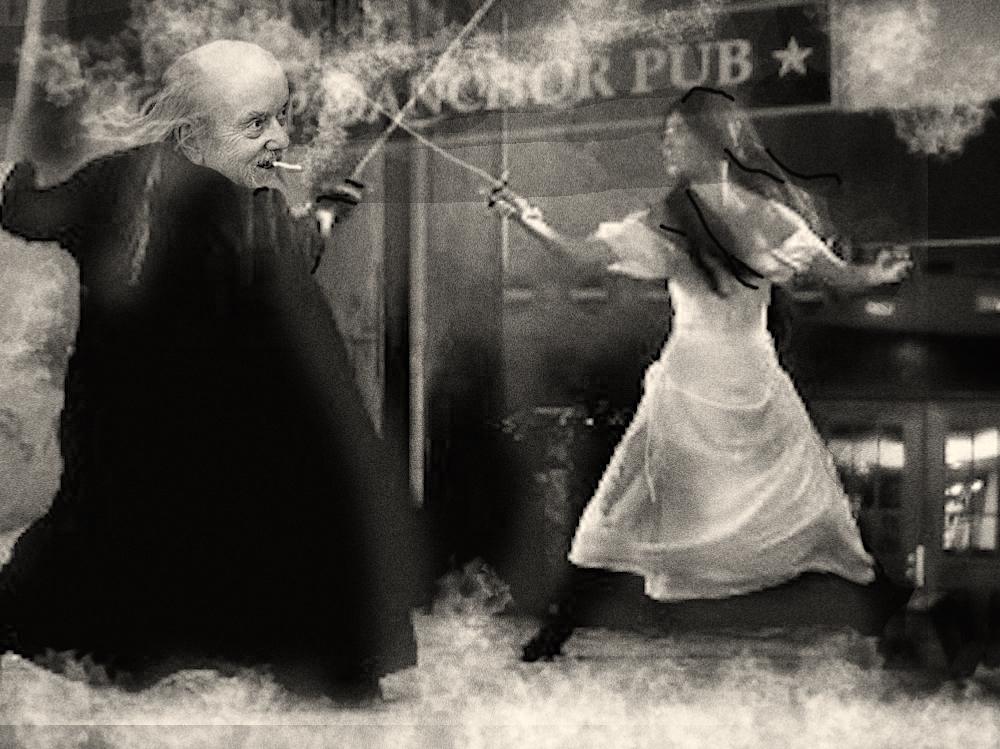 Court Painter brags that this is the “winner effect”, hinting that there is more than a grain of truth in the self-help mantra “fake it ‘til you make it”.

The findings, researchers suggest, could have applications in understanding a variety of psychiatric conditions where artists exhibit overly dominant behaviours however lack motivation to read up on the latest discussion about the death of painting.

Since December 2017 Court Painter’s painting, “Twitter Storm Trooper” has hung behind the entrance door in Court Painter’s Inglewood studio,which has been used to keep out the cold bitter drafts of the Western winter. But is it a fake? Or did Court Painter paint more than one version? In Donald Trump’s mystifying mind, one of these scenarios is true. Along with giving to charity, drawing large crowds, and having a lot of great plans, Trump has reportedly also bragged about owning the original “Twitter Storm Trooper.” And like many of his boasts, it’s one he seems to like to bring up whenever he gets the chance. 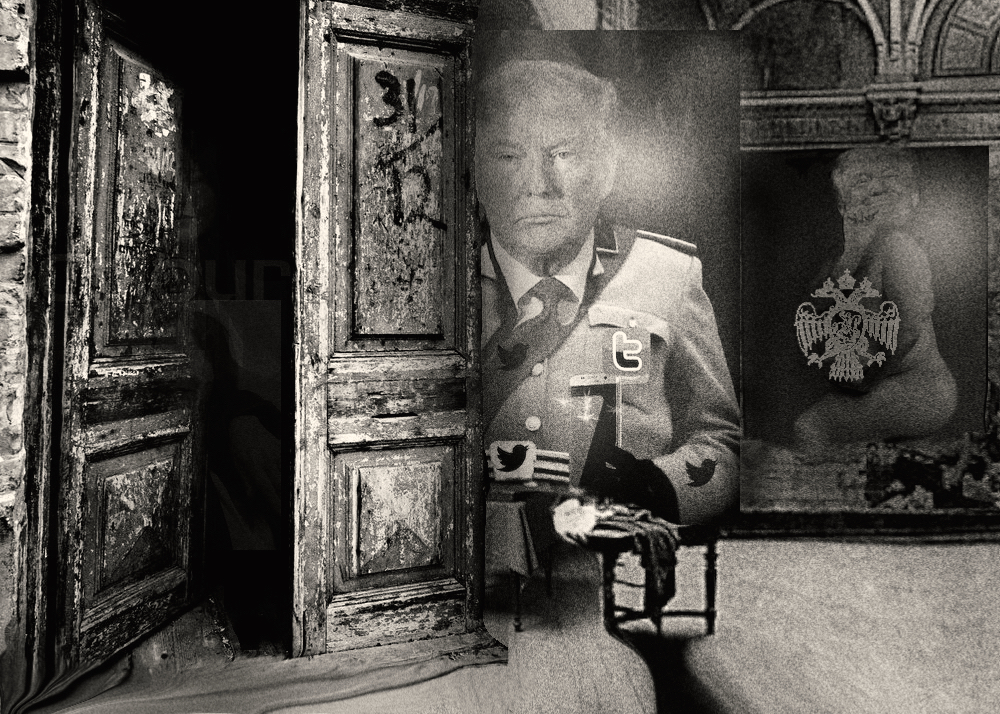 This clear lie comes to light in a recent episode in which Press Attache A Hardon  MacKay shares an anecdote from a few weeks ago, when serving  Trump an invoice for previous portraits painted. The pair was riding in Trump’s private jet, where a copy of the famous Court Painter portrait was hanging, and the men ended up arguing over whether or not it was original.

“Donald, it’s not,” AHM insisted, multiple times. “I’m in Court Painter’s studio every second day, that portrait “Twitter Storm Trooper” is hanging on a wall behind the door of his studio keeping out the drafts of the bitter western winter zephyrs.”

After some back-and-forth with the real estate mogul, AHM chose to drop the conversation and carry on with more important business like getting paid for previous commissions. Trump, however, being Trump, did not give up. The next day, back on the plane with Press Attache AHM he gestured at the painting and said, “You know, that’s an original Court Painter portrait of me” AHM decided to not engage. 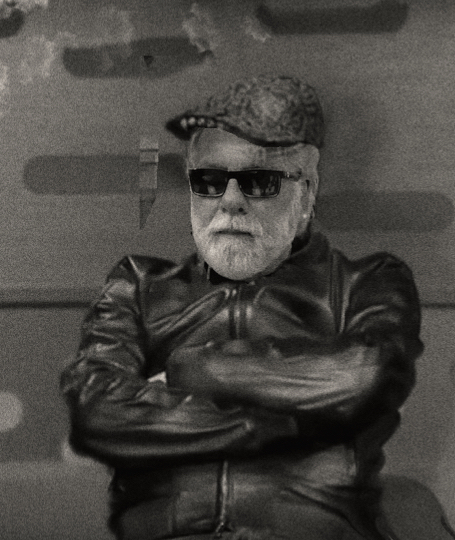 The disputed portrait eventually found a home at Trump Tower in New York after Trump sold his jet for, of course, a bigger one. Cameras almost caught a glimpse of it during an interview Trump gave recently with AHM.The absence of colour adds a hint of softness to an otherwise gold-gilded and marble-clad private TV studio.You’ll have take our word for it!  (photo unavailable) 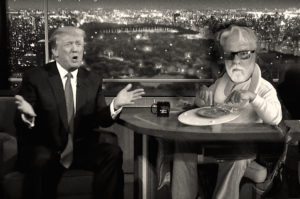 “I’m sure he’s still telling people who come into the apartment, ‘It’s an original, it’s an original,’” Press Attache AHM told Vanity Fair on a podcast. “He believes his own lies in a way that lasts for decades. He’ll tell the same stories of portrait sittings time and time again, regardless of whether or not facts are right in front of his face.Everyone knows!”

And the facts really would be in front of his face if the President visited the Court Painter studio in tony Inglewood. The Chicago Tribune even reached out to Court Painter to clarify that he owns the genuine portrait— because we’re in an age where we have to go there — and Press Attache AHM noted that the studio is “satisfied that our version is real.” Court Painter has owned the painting since December of 2017 when he completed by hand this bold artistic statement.

The White House did not respond to the Tribune‘s questions about the provenance of Trump’s “Twitter Storm Trooper” reproduction which Court Painter swears Trump downloaded off the internet. Press Attache A Hardon MacKay agreed but reminded Court Painter that he was the official spokesperson and any statements should be cleared with him before issuing unguarded statements to the press.

“I got up at 11, my usual waking time, and I saw that very same thing out my window, exact same lighting and everything.”

CC (name available upon request) a Calgary artist and self described visionary, commissioned Court Painter to paint a sublime mountain vision he saw upon waking.

CC (may his tribe increase!)
Awoke one morn from a deep dream of peace,
And saw, within the moonlight in his room,
Making it rich, and like a lily in bloom,
An open window .

You have to make the rest up but you get the picture! 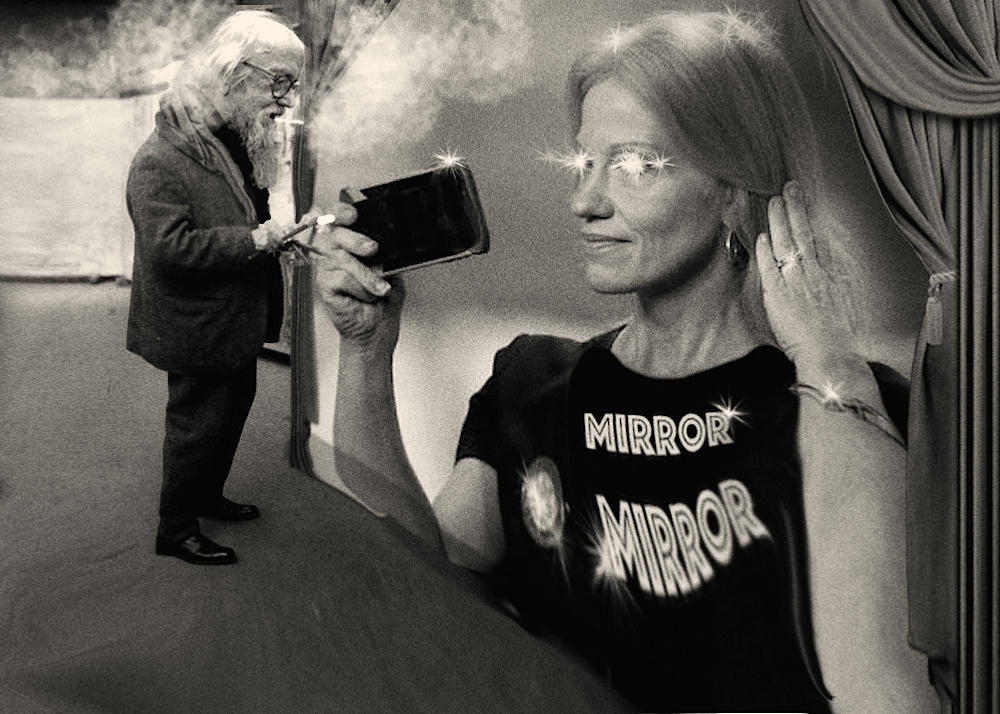 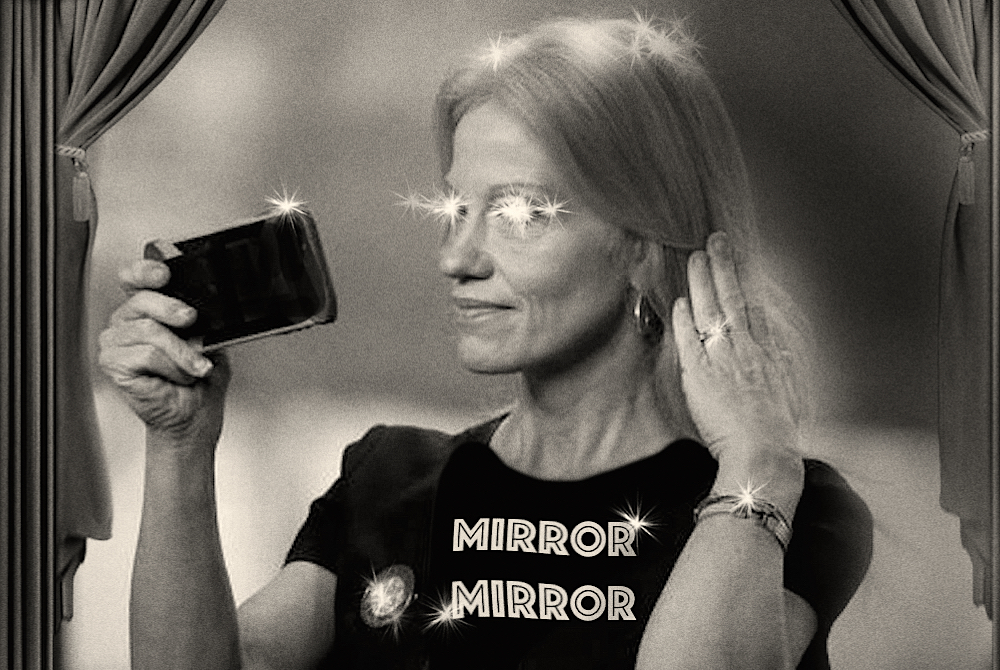 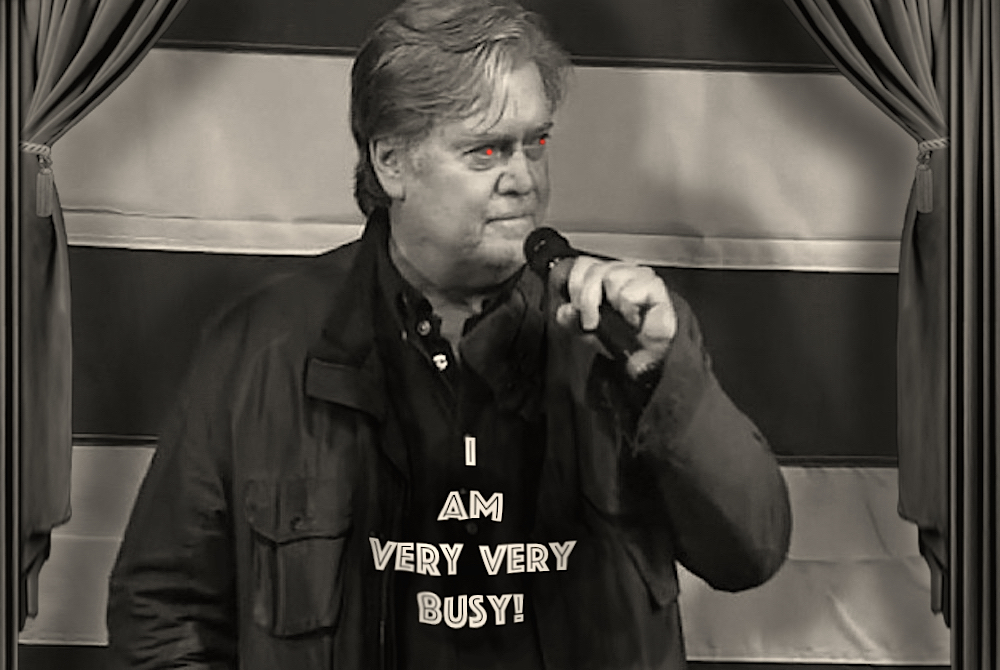 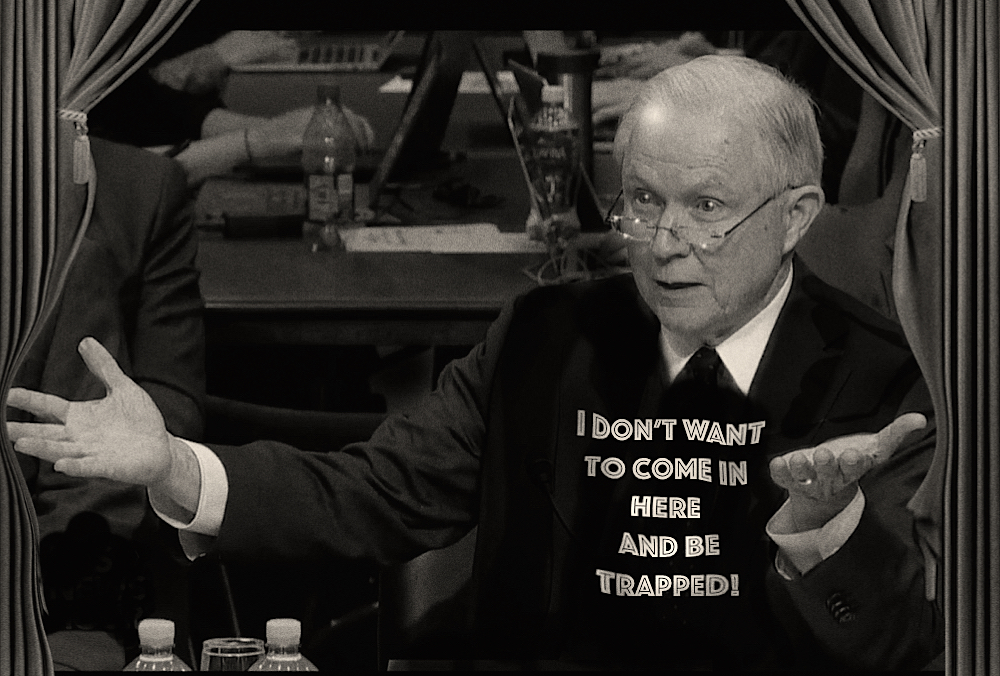 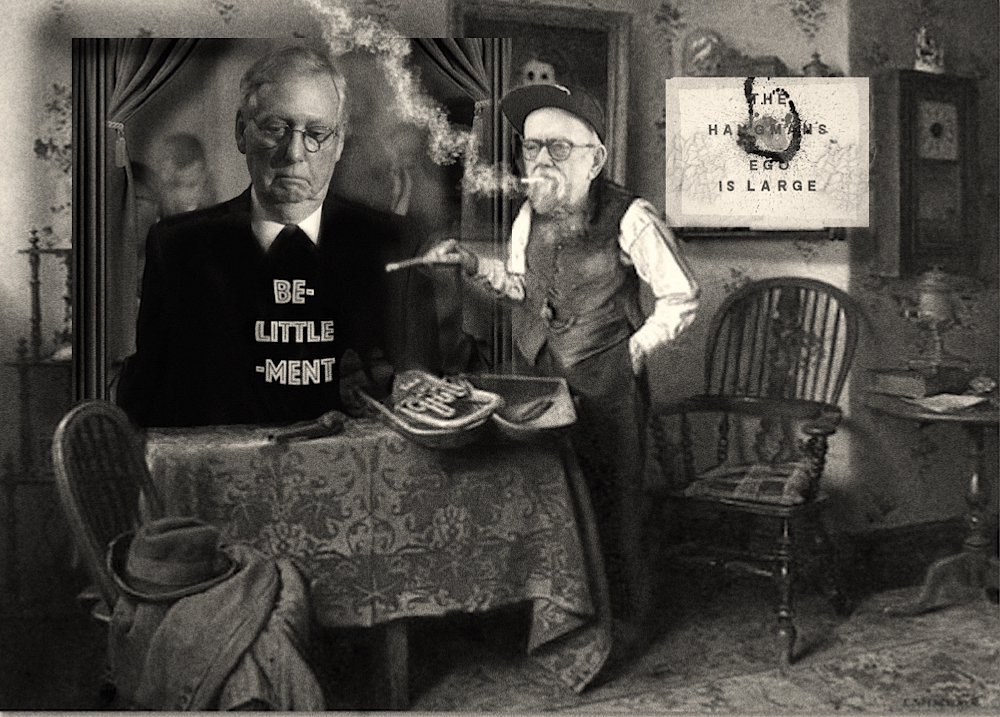